The pathways by which alien species are introduced to new regions fall into six broad classes: deliberate release; escape from captivity; contaminant of a commodity; stowaway on a transport vector; via an infrastructure corridor (without which spread would not be possible) or unaided from other invaded regions (Hulme et al. 2008). However, Gilroy et al. (2016) argue that species dispersing naturally, through the infrastructure corridor or unaided pathway, should be classed as native rather than alien. We contend their proposal is not only unworkable but also unwise. 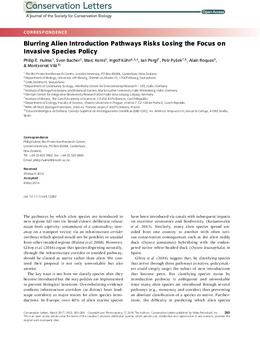 Except where otherwise noted, this item's license is described as Creative Commons Attribution