Milk production in the tropics : With special reference to the Philippines : A dissertation submitted in partial fulfilment of the requirements for the Postgraduate Diploma in Agricultural Science in the University of Canterbury [Lincoln College]

Milk for direct human consumption and for manufacturing milk products is obtained from many kinds of domestic livestock, but approximately 90 per cent of the world's supply is produced by various types of domestic cattle (McCabe, 1955).The proportion of the total milk produced by domestic livestock other than cattle as reported by Payne (1957) is probably higher in tropical than in temperate countries, but in tropical countries cattle undoubtedly still produce most of the milk. In terms of livestock units, 70 per cent of the world's cattle and buffalo population is located in the developing countries (De Guzman, 1975); but the production of these countries is only 21 to 34 per cent of the world milk and beef output, respectively. This alarmingly low animal production in most developing countries, aggravated by a generally high rate·of population growth where already 74 per cent of the world's human population is found, accounts for the low per capita protein intake of animal origin in these developing countries. It is the purpose of this dissertation to discuss the 3 existing conditions in dairying as well as problems in increasing milk production in tropical countries, particularly the Philippines. In addition, it is hoped that at the end of this report recommendations can be made, which, if implemented, may well help to resolve some of the problems which beset dairying under tropical countries.... [Show full abstract]

Digital thesis can be viewed by current staff and students of Lincoln University only. If you are the author of this item, please contact us if you wish to discuss making the full text publicly available. 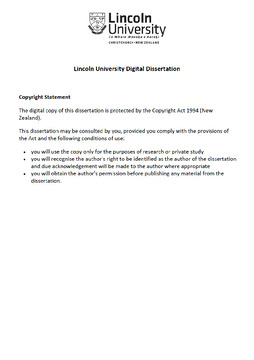