Landscape disturbance history in Westland, New Zealand: The importance of infrequent earthquakes along the alpine fault

This thesis investigates landscape disturbance history in Westland since 1350 AD. Specifically, I test the hypothesis that large-magnitude regional episodes of natural disturbance have periodically devastated portions of the landscape and forest, and that these were caused by infrequent earthquakes along the Alpine Fault. Forest stand history reconstruction was used to determine the timing and extent of erosion and sedimentation events that initiated new forest cohorts in a 1412 ha study area in the Karangarua River catchment, south Westland. Over 85 % of the study area was disturbed sufficiently by erosion/sedimentation since 1350 AD to initiate new forest cohorts. During this time four episodes of catchment-wide disturbance impacted the study area, and these took place about 1825 AD ± 5 years (Ruera episode), 1715 AD ± 5 years (Sparkling episode), 1615 AD ± 5 years (McTaggart episode), and 1445 AD ± 15 years (Junction episode). The three most recent episodes disturbed 10 %, 35-40 % and 32-50 % respectively of the study area. The Junction episode disturbed at least 6 % of the study area, but elimination of evidence by more recent disturbances prevented an upper limit being defined. The three earliest episodes correspond to the date-ranges for three Alpine Fault earthquakes from geological data, and are the only episodes of disturbance within each date-range. An earthquake cause is also consistent with features of the disturbance record: large portions of the study area were disturbed, disturbance occurred on all types 'of landforms, and terrace surfaces were abandoned upstream of the Alpine Fault. On this basis erosion/sedimentation induced by Alpine Fault earthquakes has disturbed 14-20 % of the land surface in the study area per century. Storms and other non-seismic erosional processes have disturbed 3-4 % per century. To examine the importance of the Alpine Fault earthquakes to forest disturbance throughout Westland, I collated all available data on conifer stand age structures in the region and identified dates of disturbance events from 55 even-aged cohorts of trees. Three region-wide episodes of forest disturbance since 1350 AD were found in this sample, and these matched the three Alpine Fault earthquake-caused episodes found in the Karangarua. Forest disturbance at these times was widespread across Westland over at least 200 km from Paringa to Hokitika, and originated from both tree fall and erosion processes. This disturbance history can explain the long-observed regional conifer forest pattern in Westland, of a predominance of similar-sized stands of trees and a relative lack of small-sized (young) stands. The many similar-sized stands are a consequence of synchronous forest disturbance and re-establishment accompanying the infrequent Alpine Fault earthquakes, while the dominance of mature stands of trees and relative lack of young small-sized trees in stands is explained by the long lapsed time since the last Alpine Fault earthquake (c. 280 years). I applied the landscape disturbance history information to the existing geological data to reconstruct the paleoseismicity of the Alpine Fault since 1350 AD. Best estimates for the timing of the most recent three rupture events from these data are 1715 AD ± 5 years, 1615 AD ± 5 years and 1445 AD ± 15 years. Earthquake recurrence intervals were variable, ranging from about 100 years to at least 280 years (the lapsed time since the last event). All three events caused forest and geomorphic disturbance over at least a 200 km section of Fault between the Karangarua and Hokitika Rivers, and were probably single rupture events. Suppressions in cross dated tree-ring chronologies in the western South Island suggest that the last rupture occurred in 1717 AD, and extended as a single rupture from Haupiri to Fiordland, a distance along the Fault of 375 km.... [Show full abstract] 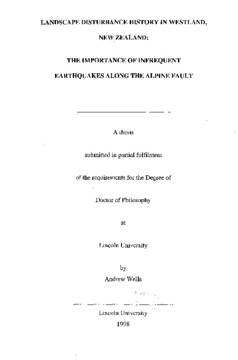