Soft wax scale (SWS) Ceroplastes destructor (Newstead) and Chinese wax scale (CWS) C. sinensis Del Guercio (Hemiptera: Coccidae) are indirect pests of citrus (Citrus spp.) in New Zealand. Honeydew they produce supports sooty mould fungi that disfigure fruit and reduce photosynthesis and fruit yield. Presently, control relies on calendar applications of insecticides. The main aim of this study was to provide the ecological basis for the integrated management of SWS and CWS. Specific objectives were to compare their population ecologies, determine major mortality factors and levels of natural control, quantify the impact of ladybirds on scale populations, and evaluate pesticides for compatibility with ladybirds. Among 57 surveyed orchards, SWS was more abundant than CWS in Kerikeri but was not found around Whangarei. Applications of organophosphates had not reduced the proportion of orchards with medium or high densities of SWS. Monthly destructive sampling of scale populations between November 1990 and February 1994 was supplemented by in situ counts of scale cohorts. Both species were univoltine, but SWS eggs hatched two months earlier than those of CWS, and development between successive instars remained two to three months ahead. The start of SWS crawler emergence varied by seven weeks between 1988-1993. A linear relationship between scale size and fecundity was found for both species. The variation in mean scale size amongst orchards corresponded to large differences in egg production. Survivorship curves and life tables were compared between populations with high and low levels of ladybird predation. Over 90% of crawlers failed to settle. At four orchards with high numbers of ladybirds, 99% of settled first and second instar scales died. The key mortality factor occurred at this stage where ladybirds were abundant. In contrast, where ladybirds were scarce, mortality of first and second instar scales was approximately 82% and some scales survived to breed. Mortality of third instar and adult scales was approximately 80% and 50% respectively. Parasitised scales were incubated and parasitoids identified from emerged adults. Diseased scales were cultured to identify fungal entomopathogens. One primary and one secondary parasitoid (Euxanthellus philippiae Silvestri and Coccidoctonus dub ius (Girault) respectively) and two fungal pathogens (Verticillium lecanii (Zimmermann) Viegas and Fusarium spp.) attacked one or both of these stages of SWS and CWS. Parasitoids and pathogens each caused less than 30% mortality. Density-dependent mortality was not shown by any of the natural enemies. The effect of ladybirds on scale populations was assessed by sampling and experiments where branches and trees were covered to exclude or include ladybirds. Ladybirds predated first and second instar scales and could reduce local scale populations to extinction. Both larval and adult steel blue ladybirds (SBL) Halmus chalybeus (Boisduval), Rhyzobius forestieri (Mulsant), and adult Cryptolaemus montrouzieri Mulsant and Rodolia cardinalis (Mulsant) fed on SWS in laboratory experiments. Adult SBL and R. forestieri consumed approximately 15 scales per day in the field. SBL comprised 98% of ladybirds in visual and manual searches. Pesticides were screened for toxicity to SBL by a slide dip method, and for disruption to predation by the reduction in feeding on treated leaves. Fungicides and insecticides inhibited feeding by SBL and reduced their numbers. Copper-based fungicides reduced predation by about 80% compared with approximately 30% by non-copper fungicides. Buprofezin was non-toxic and non-disruptive to SBL. Mineral oils were moderately toxic but caused some disruption to predation. Organophosphates, synthetic pyrethroids and an insecticidal soap were highly toxic to SBL at recommended label rates. Three fungicides were evaluated in an orchard. Both copper and non-copper fungicides reduced numbers of ladybirds. Nine-spray programmes reduced numbers more than 5-spray programmes. SWS were more abundant than CWS probably in part because their phenology made them less vulnerable to adverse environmental conditions and ladybirds. Currently, SBL are the key to biological control of SWS and CWS, but with present spray programmes particularly those involving organophosphates, ladybirds cannot be relied on to be sufficiently abundant at the right time of year to achieve control. Orchardists should avoid or reduce applications of copper fungicides during spring and summer to minimise disruption to predation of SWS by ladybirds. The introduction of parasitoids such as those which control SWS in South Mrica and Australia would complement the existing biocontrol from ladybirds and should be investigated.... [Show full abstract] 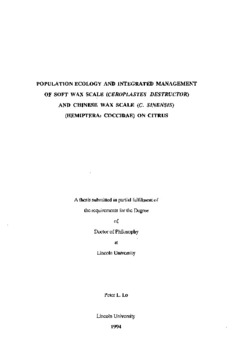