Cost effective control of brushtail possums (Trichosurus vulpecula) in New Zealand is currently reliant on the use of toxins, particularly aerial application of sodium monofluoroacetate (1080). However, possums' development of bait aversions threatens the continued efficacy of such control operations. Bait aversions (or shyness) have been well studied in rats (Rattus spp.), but only recently documented in possums. The aim of this study was to examine the influence of novelty, familiarity, and bait 'cues' on possums' development of aversions, in both cage and field environments. The motivation of this work was to provide better understanding of the problem and provide advice for managers undertaking possum control. The first cage trial determined the effects of prefeeding on aversion development. Three treatment groups received for 7 days either i) no prefeed ii) plain prefeed, or iii) dyed and lured prefeed baits. Each possum then ingested sub-lethal 1080 bait. Seven days later, the possums were tested for development of an aversion towards 1080 bait, a prefeed bait, and a prefeed bait containing brodifacoum. Most (96%) non-prefed possums became averse to the 1080 bait, compared with only 55% and 9% of the two prefed groups. Similarly, over 90% of the non-prefed possums were averse to prefeed and brodifacoum baits, compared to <15% of the prefed possums. The trial also showed that novelty has an influence on possums' aversion development; as prefeed and toxic baits became more similar (i.e. the more cues shared), fewer prefed possums were able to distinguish between the two after sub-lethal poisoning and so few developed aversions. The second cage trial examined the influence of bait cues and prefeeding duration on possums' development of aversion. Three main treatment groups received either i) dyed, ii) cinnamon lured, or iii) dyed and lured prefeed baits, for either 1 or 7 days. After sub-lethal poisoning possums were tested for aversion towards 1080 bait and a prefeed bait. Once again the influence of familiarity was apparent, with only 34% averse to the toxic bait, significantly less than for non-prefed possums (cf. trial one). Dye seemed to provide relatively weak cues linking prefeed and toxic bait, with 7 days prefeeding required to inhibit aversion development. In contrast, cinnamon appeared to provide relatively strong olfactory and/or taste cues linking prefeed and toxic baits, with one exposure to cinnamon lured prefeed sufficient to inhibit aversion development. As in the first trial, most of the possums that developed aversion to the toxic bait did not generalise this aversion to the prefeed bait. Some possums were seemingly able to detect 0.08% 1080, despite it being 'masked' with cinnamon oil. The field trial aimed to validate results of the cage trials and to examine whether possums preferentially associate certain cues with poisoning. Two treatment groups received either cinnamon lured baits, or apples, for 3 weeks. After sub-lethal poisoning possums were tested for aversion towards a non-toxic prefeed bait, a dyed non-toxic bait, a toxic bait, and a dyed toxic bait, all of which contained cinnamon. Once again most non-prefed possums developed generalised aversions, avoiding all cereal baits. In contrast, prefed possums consumed familiar prefeed baits, but avoided all other baits. This demonstrated that possums could detect both dye and 1080 in a cinnamon-lured bait. This result also suggests that extended prefeeding may enable possums to distinguish between prefeed and toxic baits and therefore develop aversions. These trials demonstrate that possums develop aversions that are similar in character to those described in rats. Novelty of bait has a strong influence on possums' potential to develop aversion to that bait and to other baits perceived as similar. Ways that prefeeding offers potential for future management of bait aversion in pest populations are discussed.... [Show full abstract] 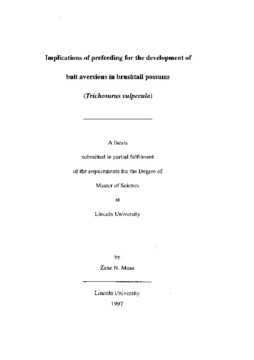