On a leucophyre from the Selwyn Gorge

Description and chemical analysis of rock found at Selwyn Gorge. It was concluded to be an augite rock with some plagioclase and iron oxide; sometimes, however, the saussurite appears to be as abundant as the augite. That it is an altered rock is undoubted, and it may perhaps be an altered dolerite. Its granulitic texture shows that it consolidated during movement, and its association with beds of volcanic ash shows that it is an old lava stream, probably of Triassic age. 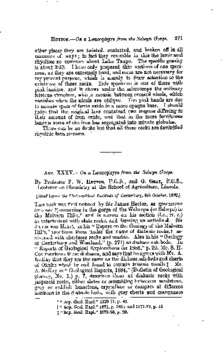