It was theorised that stop and start hysteresis in yield stress is inevitable in explaining the intermittent or pulsating field behaviour of debris flows. This aspect was investigated under controlled laboratory conditions through the application of viscometric techniques. Remoulded debris flow materials and some small-scale physical models of the prototype materials were subjected to viscometric tests using a 40-cm diameter cone-and-plate rheometer with a gap angle of 30º. These involved both stress-driven and shear rate-driven tests to establish the yield and stopping stresses, and the rheological behaviour of the flowing material, respectively. The results confirmed that yield stress is indeed higher than the corresponding stopping stress in a given flow event. This hysteresis in yield stress was detected easily in shear stress-driven tests. Extrapolation to yield and stopping stresses from the flow curves of shear rate-driven tests was not possible because of data scatter. The yielding phase was characterised by a gradual build-up of strength before a flow could occur in response to an applied stress. It signifies the gradual deformation of the material as coarse grains reorient and rearrange themselves (through rubbing and interlocking). Hence, the yield strength of the material is controlled by the frictional resistance (static) between coarse grains. The stopping stress is equivalent to the minimum shear stress as the material slows to a halt. The rapidly increasing apparent viscosity caused by decreasing shear rates outweighs the applied stress so that the material gradually slows down. The apparent viscosity includes the sliding friction of coarse grains and the viscosity of the interstitial fluid both of which have been physically active while the material is flowing. Dilatancy induced by shear minimises the interlocking of grains while the interstitial slurry reduces the contact between grains thus maintaining a low shear strength in a newly stopped material. Dilatancy is less apparent in fine-grained materials due to the more intensified particle aggregation and clustering of grains thus reducing grain-grain collisional energy. The results then showed that stop and start hysteresis in yield stress is more conspicuous in coarse-grained debris flow materials. This was also revealed in the tests of small-scale physical models of the prototype material. The magnitude of both yield and stopping stresses increases with increasing solid concentration and confining pressure (i.e. depths of the overburden). The coarse-grained debris flow materials display a dilatant plastic rheology while the fine-grained materials show a non-linear viscoplastic rheology. Some of the flow curve envelopes also exhibited other phenomena which are associated with the rheological behaviour of dense suspensions. These include granulo-viscous behaviour resulting in a wide data scatter, and torque decay with time that reflects the slow process of structure formation within the material under steady shearing. At varying shear rate, the torque decay can be due to the adjustment of particle packing structure that can be altered by a change in shear rate thus resulting in a decreasing shear stress. The viscometric tests of the physical models did not show the expected behaviour as the 'real' fluid effects seem not to completely simulate the whole debris flow phenomenon. It is more appropriate in viscometric tests of this kind to use actual material in order to have a more accurate description of the flow behaviour even in qualitative terms. While this study has confirmed the presence of stop and start hysteresis in yield stress, it also shows that the rheology of debris flows is very complex.... [Show full abstract] 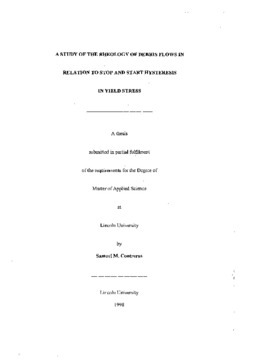