The relationships of the New Zealand Wrens have been debated for a century but up to 1981 it has not been clear to which suborder of the Passeriformes they should be assigned. Comparisons between the single-copy DNA sequences of Acanthisitta chloris and those of other passerine birds indicate that the Acanthisittidae are members of the suboscine suborder Oligomyodi, and that they are sufficiently distant from other suboscine passerines to warrant separation as an Infraorder, Acanthisittides. 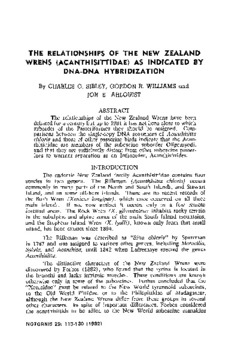