Two annual legume species and their selection of nodule occupants

Despite New Zealand's reliance on legume and ryegrass dominated pastures, little is known about naturalised rhizobia strains in New Zealand soils. This work sets out to determine whether naturalised rhizobia resident in a Canterbury dryland pasture soil will nodulate two different annual legume species. ERIC (enterobacterial repetitive intergenic consensus) PCR is a method used to determine bacterial strain diversity. It can be used to distinguish even closely related rhizobia strains and has been used in numerous studies to determine nodule occupancy. 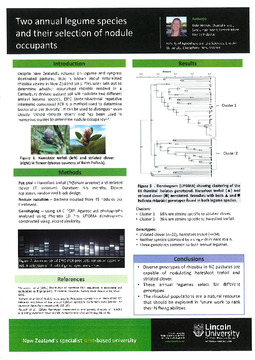