A commentary on "Whatever next? Predictive brains, situated agents, and the future of cognitive science" by Clark, A. (in press). Behav. Brain Sci. I suggest two refinements of Clark's (in press) account of predictive brains and situated agents. The first concerns the idea of the brains as a "predictive machine" (Clark, in press, Section 1). Simply, the brain does not predict how the world is but, rather, it trails actions that represent opportunities for adaptive ways of "going on" in the world. 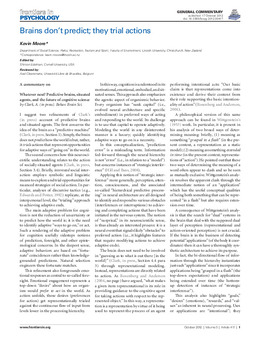 Expand record
© 2012 Moore. This is an open-access article distributed under the terms of the Creative Commons Attribution License, which permits use, distribution and reproduction in other forums, provided the original authors and source are credited and subject to any copyright notices concerning any third-party graphics etc. This Document is Protected by copyright and was first published by Frontiers. All rights reserved. It is reproduced with permission.