The demise of the farm labourer and the rise of the food technologist : a century of radical change in farm employment, 1900-1999

This paper reviews changes in farm employment over the 20th Century by viewing farm work as it was around 1900 and how it is appearing to be by 1999 through the eyes of contemporary observers. Then changes in work and employment are considered under the following headings: The Role of Government, the Labour Force, Production, Mechanisation, Pest Control, Transport, Communications, Marketing, Education, and Employment Relations. The paper concludes that while much farm work has increasing technological demands, at the same time much also retains its laborious nature. 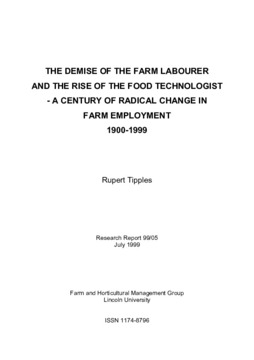