The behaviour of ferrets (Mustelajuro), on the Culverden flats, North Canterbury, and stoats (Mustela erminea) in Pureora forest, Central North Island, was examined with a view to providing improved knowledge for mustelid control in New Zealand. Home ranges and territoriality of both species were examined. Ferret mortality and subsequent reinvasion following poison operations was also examined on two sites and recommendations on control station spacing derived from home range data. Trapping and radiotracking of 52 ferrets began in December 1996 and from January 1997 ferret home range data were gathered by radiotracking on two North Canterbury study sites. Sodium monofluoroacetate (1080) laced fish paste was applied on one site in February 1997 and diphacinone laced fish paste was applied on the second site in March 1997. The subsequent mortality of radio collared ferrets was monitored. Reinvasion into the poison areas was assessed by trapping for four weeks after the toxic pastes were removed. Traps set near creeks or rivers caught 300 % more ferrets than those in other habitats. The mean home range size of ferrets on the two study sites in summer was 132 (± 20 SE) ha; this did not differ between the sexes and no evidence for territoriality was found. 1080 poison killed 50%, and diphacinone 86%, of the ferrets that were recorded in or near the poison areas. Reinvasion was rapid, with new ferrets being caught within two days of traps being opened. After 30 days of trapping ferret numbers in the 1080 poison area had reached 73 % of the pre-poison level. The maximum recommended optimal control station spacing for ferrets is 500 m, with riparian zones being the most productive habitat for control work. The mean home ranges of 3 female and 6 male stoats in Pureora mixed podocarp forest in winter did not differ significantly, and averaged 57 (± 11SE) ha. Summer data were added to winter fixes extending average home ranges to 64 (± 14 SE) ha. The stoats appeared to exhibit intrasexual territoriality. The maximum recommended spacing of control stations for stoats in this study is 250 m, however the variability of terrain and vegetation in such habitats would make a grid pattern difficult to service; more work on stoat habitat preference is required. More trials are needed to determine if diphacinone fish paste effectively controls all age classes of ferrets at other times of year. Research on the most efficient bait station spacing regime should also be implemented to reduce costs and optimise the length of time a control operation should run. A better understanding of seasonal mustelid movements and reinvasion rates will allow pest managers to better plan future trapping and poison operations.... [Show full abstract] 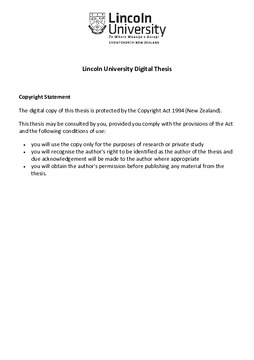